My fascination with the radiometer began in the gift shop of the Griffith Observatory after an exciting day with my parents and siblings− a day that included a showcase Foucault pendulum swinging in a large pit and a giant crackling tesla coil spewing lightning.

On a glass shelf in a well-lit display case near the cashier I spied what looked like a light bulb on a stand. A 60 watt desk lamp was in place to illuminate the glass orb, and inside the orb something reminiscent of a small weathervane was spinning like crazy. I stood mesmerized. Somehow my parents bought one (rarely where such requests granted) and for years it sat in the window of our dining room.

Here is a radiometer in action:

Invented by William Crookes, a brilliant chemist and discoverer of the element Thallium, the core of the device is a balanced assembly of four small squares each painted black on one side and silver on the other, and mounted on a glass spindle. This assembly is called the fly. The fly is placed on a needle point which serves as a bearing that provides minimal friction. The tricky part of the construction is that the bulb needs to be almost (but not completely) evacuated of air to make a functioning radiometer. The was hard to do in 1876, yet the technology to do so, a Geissler mercury vacuum, was just invented a couple years earlier and Crookes had one in his lab.

As one can see from the video, the fly within the radiometer spins with the silver sides leading and the black sides following. Many great names in physics have worked on a credible physical explanation for why the fly spins at all, and the radiometer was at the center of the debate of whether light is a wave phenomenon or could be described as small particles. (We now know the answer is both, but that is another story!) The famous physicist connected to fluid dynamics, Osborne Reynolds (of the eponymous Reynold’s number) came up with the best explanation in 1879. The light energy is absorbed by the fly and its panels heat up. The fly is then propelled by gas moving from the hotter black side to the cooler white side of each panel. More than 40 years later, none other than Albert Einstein showed that Reynold’s effect was not enough for the measured speed of rotation, and in a paper published in 1924 (only available in German it seems) gave further details of how thermomolecular flow near the edges of the panel contribute significantly to the generation of rotation.

The physics of the radiometer continues to be detailed and refined in a number of recent papers. A 2010 Applied Physics Letters paper by Hin et al discuss how a micro-motor based on the Crooke's radiometer might be used to power a rotating sensor in live heart tissue, where the rotation is powered by light from a fiber optic cable instead of an electric current (which can disrupt heart function).

Yet another physics toy with a long history, able to garner the attention of many famous physicists, and remaining the subject of scientific curiosity and perhaps even life saving application.

A note of caution: Most radiometers found in museum gift shops (and in many online catalogs) have packaging that claims the device shows the presence of radiation pressure− while it has been long shown that light radiation does exert pressure, radiometers do not in fact operate on this principle!

Available from these sources:

Hundreds of options on eBay: 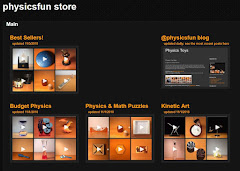 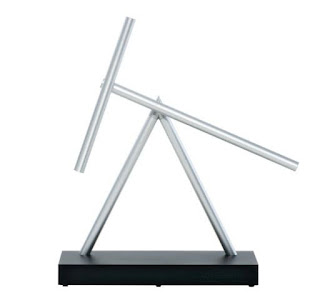